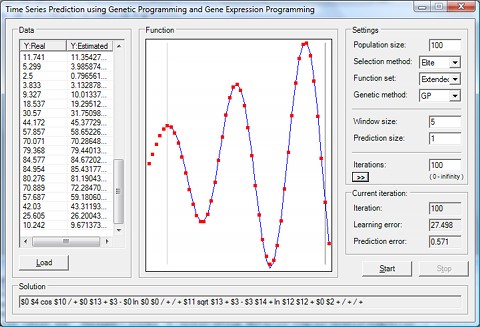 This demonstration tries to solve yet another task with Genetic Programming and Gene Expression Programming. For the given time series it tries to build an algebraic expression, which calculates next time series value from the given known past values. Once a good expression is found during training phase, the expression may be tried to predict future data points from the last known values.

This sample demonstration uses motion detection as its first step and then does some interesting routines with the detected object – hands gesture recognition. Let’s suppose we have a camera, which monitors some area. When somebody gets into the area and makes some hands gestures in front of the camera, application should detect type of the gesture and raise an event, for example. When the hands gesture recognition is detected, the application may perform different actions depending on the type of gesture. For example, gestures recognition application may control some sort of device or another application sending different commands to it depending on the recognized gesture. What type of hands gestures are we talking about? This particular application recognize up to 15 gestures, which are combination of 4 different positions of 2 hands – hand is not raised, raised diagonally down, diagonally up or raised straight.

Sample application demonstrating how to use the Image Processing (Based on face tracking) to provide joystick-like controls for a Windows application.

The Voice Command Demo demonstrates a simple speech recognition by showing you the commands it recognizes.

The Voice Command interface is the high-level interface for speech recognition. It is designed to provide command and control speech recognition for applications. With this interface, a user gives the computer simple commands, such as “Open the file”, and can answer simple yes/no questions. Command and Control does not allow speech dictation.