Visual surveillance is an attempt to detect, recognize and track certain objects from image sequences, and more generally to understand and describe object behaviors.

The ability to learn what normal behaviors and anomalies are.
For example it is known that in an office building entrance, people usually go straight to the lobby after entering the building. Thus individuals that go in a different direction can be considered harmful.

Increases effectiveness of the entire surveillance process by paying attention only to certain events instead of watching and analyzing several different surveillance cameras as happens today. Such a system can also decrease costs.

For example, by knowing how many cars are using a certain road and how many are coming from road A or B we can decide which road to widen.

Just a nice usage found on coding4fun, not all reasons have to be dead serious. 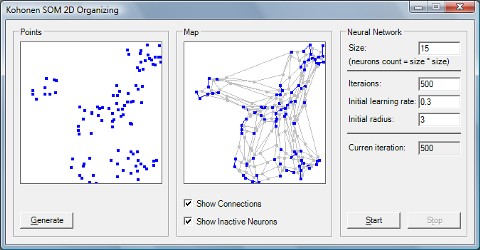 This application represents another sample showing self organization feature of Kohonen neural networks and building color clusters. All network’s neurons have 3 inputs and initially 3 corresponding weights of each neuron are initialized randomly in the [0, 255] range. Weights of each neuron may be treated as RGB tuple, which means that initially neural network represents a rectangle of random colors. During training phase, the network is fed by random colors, which results to network’s self organizing and forming color clusters.

This application demonstrates the usage of Image Processing Algorithms to Detect Human Skin in a picture, this can be used in a wide variety of AI projects.